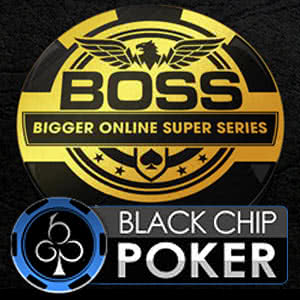 Eight days of high roller poker action is coming to the Winning Poker Network and its top sites of Americas Cardroom and Black Chip Poker from July 8-15 2018 as the Bigger Online Super Series (BOSS) will feature 26 events and pay out more than $3 million in guaranteed prize money.

Most of the BOSS tournaments have entry fees ranging from $109 to $530. However, there are a few exceptions that include an 8-Max $1,050 buy-in event on July 11, a $1,050 Super Knockout set for July 13, and the featured $1 million guaranteed Main Event on July 15 that costs $2,100 to enter. Of course, as ACR and BCP players are accustomed to, all of the BOSS tournaments can be entered at a fraction of the buy-in by winning a seat via the numerous satellites available.

While this upcoming version of BOSS is being billed as 26 events, the series actually consists of 25 tournaments and one $5,100 cash game Cage match. If you’re unfamiliar with the format of Cage events, players buy in for $5.1K and get 5,000 in chips, the value matching the buy-in minus the $100 rake.

Cage players will be required to remain seated and playing at the table for five hours and can not leave unless they happen to lose all their chips. The blinds and antes will increase at one-hour intervals, starting at $10/$20 with a $2 ante and concluding in the last hour with blinds at $50/$100 and a $10 ante.

The $5,100 Cage event is #12 on the BOSS schedule and gets underway at 7:00 p.m. ET on Wednesday, July 11. Unlike the BOSS MTT events that typically have lengthy late registration periods, there is no late registering for the Cage match as all players will be locked in for the five-hour duration once cards are in the air, with only eliminated players allowed to leave.

The latest craze in online tournament action within the poker industry as a whole is to offer an assortment of different games on series’ schedules. The BOSS docket is no exception in that regard, featuring 6-Max, Hyper-Turbo, and Super Stack No Limit Hold´em tournaments. Pot Limit Omaha lovers can choose between a handful of PLO and PLO8 events, with one of those set up as an 8-Max Bounty tournament.

BOSS concludes with a blockbuster final day that will pay out over $1.3 million in guaranteed prize money. That includes the $2,100 buy-in Main Event offering $1 million GTD. WPN is the only poker network available to US players that regularly hosts guaranteed tournaments that reach $1 million.

If the buy-in amounts for BOSS happen to be out of your budget, don’t forget that satellites are available at Americas Cardroom and Black Chip Poker. All told, BOSS guarantees for all 26 events total $3,020,000, which comes to an average of more than $115,000 per event. The big buy-ins tend to keep the fields small, meaning less players to climb over on your way to a big score – if you play your cards right!