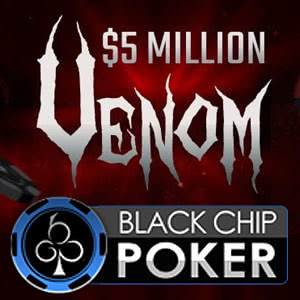 The Winning Poker Network can lay claim to the biggest MTT ever hosted by a US-friendly site as the $5 million GTD Venom has a massive prize pool of $6,382,500.

Day 1C was held on Sunday, July 21 and 1,328 entrants took part, joining the 439 entrants on Day 1B and 785 more who queued up to play on Day 1A. All told there were 2,553 entrants who either ponied up the $2,500 + $150 buy-in or qualified for a fraction of the entry fee in dozens of satellites and step tournaments held in support of the Venom in the days leading up to the record-breaking event.

Those qualifiers were running at WPN sites such as Black Chip Poker and Americas Cardroom, the top two poker rooms within the network. WPN had the most extensive tournament schedule of all US-facing poker sites even before making history with the Venom but has now added another feather to their cap with the multi-day event that many thought would miss its guarantee by a lot.

The naysayers pointed to a recent software update at WPN that hasn’t yet worked out all the glitches and kinks. Issues still to be resolved are the display of points earned by players in the loyalty program and The Beast and Sit and Crush race.

Those issues are minor compared to the disconnects and downtime that occurred repeatedly directly after the software upgrade began on May 16 and continued far longer than even the IT experts at WPN imagined. The network pressed on with the show, which was a lofty $5 million guaranteed tournament that exceeded perhaps everyone’s expectations.

A Look at the Numbers

The three Day 1s saw a total of 374 players move on to Day 2 action. The bulk of those, naturally, came from the huge turnout on Day 1C that tallied 207 survivors who joined with 167 players that made it out alive in Days 1A and 1B combined.

Congratulations to everyone who made it to Day 2 of the $5 Million Venom. You are one step closer to the $1 Million first-place prize! We will have 12 hours of play today, or down to the final eight players.#TheVenom #Venom #VenomTournament #5Million pic.twitter.com/vYfVBPTamh

Day 2 gets underway on Monday, July 22 at 1:00 p.m. ET. and will go for 12 hours. Day 3 is scheduled for Tuesday, July 23 at the same starting time and will play down to eight players. The final table is set for Wednesday, July 24 at 5:00 p.m. ET and the winner will walk away a millionaire!

The kickoff to the latest running of the Online Super Series (OSS) Cub3d began on Sunday, July 21 also. The festival is set to pay out more than $13 million over the course of 160 events and will run thru August 18.

The Mini Online Super Series (MOSS) featuring smallish buy-ins is the first leg of the three-tiered series and all the guarantees were met and beyond on Day 1. Still to come are the medium level buy-ins of the OSS and the high roller events categorized under Bigger Online Super Series (BOSS), with two $1 million GTD tournaments on the schedule.

The huge success of the $5 million GTD Venom has WPN honchos thinking even bigger as the tournament lobby in the poker client at Black Chip Poker and Americas Cardroom already lists a $6 million GTD Venom to be played in November and December.

We have a big announcement!

Coming on the heels of our current $5 Million Venom, we will host a $6 Million Venom starting right after #Thanksgiving.

This time there will be four Day 1s with Day 1A kicking off on November 27. The opening day will be followed by Day 1B on December 1, Day 1C on Dec. 4, and Day 1D on Sunday, Dec. 8. Players will then move forward to Day 2 action on Monday Dec. 9 with another new millionaire certain to be crowned in time for the Christmas season!