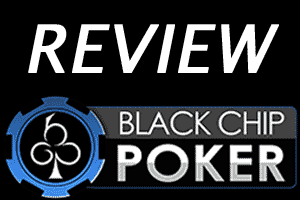 July, 2022 – Black Chip Poker is one of the leading skins on the Winning Poker Network – a network that has developed a reputation for integrity, excellent customer service and a wide range of opportunities for players of all bankrolls.

It is because of these factors that I chose to invest some of my own money to play on the site and consequently my review of Black Chip Poker is based on my own experiences. Having played there for some time, I would strongly recommend it to anybody with a little bit of poker skill and a keen eye for value (unless you have a Mac, because there is NO Mac poker version at this moment… Windows only).

The cash game tables at Black Chip Poker are dominated by Texas Hold´em and Omaha. Although a menu exists for “other games” (Stud, 32 Card Poker and Telesina), there is never any action on these tables and they are best ignored.

The stakes of the cash games vary from $0.01/$0.02 all the way up to $25.00/$50.00, with certain tables having limits (“Caps”) on them about how much you can bring to the tables. These certainly protected my bankroll when I first started playing at Black Chip Poker.

Running alongside the cash games is a non-contributory rake race called the “Beast” and when rake of $0.25 or more is deducted from a cash game pot, points are awarded to the players who contributed to the pot. The “Beast Points” accumulate on a weekly leaderboard and, at the end of each week, the top couple hundred of players on the leaderboard are rewarded with cash prizes and tournament entry tickets.

I must admit that I was tempted to have a go at topping the Beast leaderboard and collecting thousands of dollars in prize money; but it is pretty difficult for a recreational player to make an impact against the top players – who must dedicate their lives to earning Beast Points. It is not impossible to cash modestly in the Beast promotion, but you have to dedicate a significant number of hours to make the pursuit of a top position worthwhile – or play very loose at nosebleed stakes (not recommended).

If you are not that fussed about playing cash games, Black Chip Poker has an excellent range of Sit & Go and multitable tournaments. The Sit & Go games have their own leaderboard competition called “Sit & Crush” in which players earn points for competing in Sit & Go games, irrespective of how they perform in them.

Extra points towards the leaderboard competition can be earned by registering for an “On Demand” tournament before it starts – “On Demand” games getting underway when a predetermined number of players have registered (like a Sit & Go) and then continuing with a late registration period to boost the number of players, the prize money and the distribution of the prizes – like a multitable tournament.

Speaking of multitable tournaments, the schedule on Black Chip Poker is very impressive. The games vary in format from knockouts, to hyper-turbos to deepstacks to “Winner takes All” Games. I understand that the site will soon be introducing Jackpot tournaments which will be three player hypo-turbos with random prizes awarded to the winner.

Black Chip Poker also hosts some very valuable tournaments in its frequent poker series. For a player like me (with my bankroll) I am delighted by the number of low buy-in satellites and value-added mega satellites that allowed me to qualify for a fraction of the buy-in. However, my Black Chip Poker review would be lacking if I did not comment on the standard of play you will find at the tables.

Cash games tend to be very loose as players chase “Beast Points” that will elevate them up the leaderboard. Tournaments are completely the opposite and are very tight – with the exception of the turbo and hyper-turbo events. Sit & Go games are somewhere in the middle depending on whether you are playing in a $5 “Double or Nothing” game or a $30 qualifier for a major tournament.

So Many Bonuses and Promotions

I would guess that the majority of players are drawn to Black Chip Poker because of its first deposit bonus of up to $1,000 (more information about the bonus can be found on my Bonus Code page), but once you start playing on Black Chip Poker, a whole load of other bonuses and promotion become available to you.

I will skip over the “Elite Benefits” program because I have dedicated a whole section to that below, but you should be prepared for being frequently offered reload bonuses, awarded tickets into freeroll tournaments and cash being added to promotions whenever the site wants to drive more traffic to a particular area. Like I said in my introduction – look out for value!

The promotions are constantly changing, so I won´t write about something here that has disappeared in a few weeks time. Instead, I would suggest you look at the news pages on this site, where details of new promotions on Black Chip Poker and special offers will be announced.

One promotion that seems to be here to stay is the “Spin to Get IN” game – a three-reel slot that appears in every tournament lobby. Players can choose to invest $0.01, $0.25 or $1.00 in a spin of the reels and, if you hit three of the same symbol, you are registered into the tournament. It worked once for me, but I wouldn’t recommend spending a large percentage of a buy-in trying to win an entry for pennies.

Despite all the bonuses and promotions, I find the driving force that makes me spend more time at the tables is Black Chip Poker´s “Elite Benefits” program. This has to be the best-value rewards program of any online poker site – not only for the value of the cash awards that can be achieved but also for the way in which player points are distributed in the program.

Black Chip Poker uses the “dealt rake” method of distributing player points, which means that you receive points when rake is deducted from the pot irrespective of whether you contributed to the pot or not. For a tight(-ish) player like me, I can open up six or eight tables, wait patiently until a premium hand comes along in position, and then contribute to the pot if I feel it is +EV for me to do so.

I found that playing this way (and not chasing Beast Points) was optimum for my game. As long as I broke even at the tables, I would be in profit for the session because of all the player points that I had been awarded. As the number of player points increases, so does the status in the “Elite Benefits” program – when points´ multipliers are applied.

I would suggest that unless you are naturally a loose player with a large bankroll, your focus should be on the “Elite Benefits” program and not on collecting Beast Points. If you play for long enough, you will inevitably cash in the Beast promotion anyway; but (in my opinion) the risk/reward you might have to take to top the Beast leaderboard is far greater than you will experience for gaining valuable rewards from the “Elite benefits” program.

The Look and Feel of Black Chip Poker

The look of Black Chip Poker is alright – I would suggest simple rather than spectacular. Having played on poker sites that eat up your computer´s memory like anything, I would prefer to have a simple interface than loads of bells and whistles that I am never going to use. The consequence of the uncomplicated look is that you can easily multitable (up to forty tables at a time if you dare) without putting too much strain on your computer.

The feel of Black Chip Poker can best described as satisfying. The poker client is easy to navigate and the gameplay is smooth. There are few distractions to prevent you focusing on what is going on, and I don´t remember ever being disconnected from a game – implying that the software is stable and secure.

I mentioned right at the beginning of this Black Chip Poker review that the site has a reputation for integrity and customer service and – in more than two years – I have found nothing to nothing to contradict this reputation. Cashouts are quickly executed and on the two occasions I had to deal with customers services (once to verify my account, once to check on the terms and conditions of a promotion), I was treated respectfully and efficiently.

There is not a lot more to add about the security, safety and service at Black Chip Poker other than there has never been any point when I recollect feeling that the games were unfair or that my bankroll was at risk due to a lack of security.

The banking options at Black Chip Poker depend on your country of residence. Usually they will include a selection of debit and credit cards, eWallets or P2P transfers through Western Union or MoneyGram. When you select your deposit option, please be aware that not all payment gateways allow for as much as $1,000 to be deposited straight away if you are attempting to clear the full Black Chip Poker bonus.

Withdrawals are handled speedily and either by check or MoneyGram unless you have deposited via an eWallet – in which case your winnings will be sent there. Black Chip Poker recently announced that it will transact Bitcoin for deposits and withdrawals, and although I prefer less volatile currencies, I can see how this will be of benefit to some players.

Why Play at Black Chip Poker?

There are plenty of good reasons why you should be playing at Black Chip Poker – especially if you enjoy getting good value for your dollar. Cash game players will like the Beast rake race, while Sit & Go players have their own leaderboard competition to aim at. Although there are rarely overlays in the major tournaments, value-hunters like me will enjoy searching through the satellites for opportunities to gain an edge and the “Elite Benefits” rewards program will just about suit everybody.

I believe that provided you don´t try limping into pots at the cash tables or play too loose in the strong schedule of poker tournaments, you should enjoy a lucrative experience at Black Chip Poker.