It’s all about the promotions after the initial bonus

August, 2022 – One of the most attractive features of Black Chip Poker is the site’s dedication to creating interesting promotions that stimulate play and offer large prizes and lucrative rewards. No – I am not talking about Black Chip Poker´s “Elite Benefits” VIP Program (which is so good that I have dedicated a whole page to it), but everything else that Black Chip Poker offers both hard-core professionals and recreational players.

Are you Brave Enough to Take on the Beast? 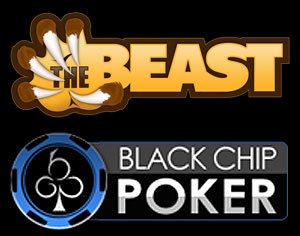 The Beast is Black Chip Poker´s weekly rake race. It is a non-contributory rake race (inasmuch as no premium is deducted from the rake to fund it) in which players are awarded “Beast Points” for contributing to the standard rake deducted from all cash game pots.

“Beast Points” determine your position on the weekly leaderboard, and each week over a hundred players share in the Beast prize pool (usually approaching $50,000) with up to a hundred more winning tickets into a feature tournament (worth $55.00) which can offer some incredibly valuable prizes.

To date, the “Beast” has paid out more than $5 million in cash and tournament entries, and because of the depth of numbers it pays, there is the chance for players with limited bankrolls to grab their share of the prize pool. Don´t be fooled though – you will need to put in a considerable amount of hours if you want to make your effort worthwhile and grab one of the top prizes. 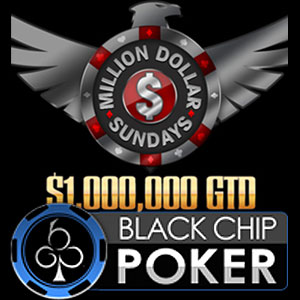 Because of its re-entry format, the $1 million dollar tournament pays deep. In the last staging of the event, 261 players (from 1267 unique entries) cashed – with a min cash being worth $800.00 – with those reaching the final table being assured of $13,200.

Naturally, the $540.00 buy-in is a bit out of reach of most bankrolls, but Black Chip Poker has an exceptionally comprehensive satellite schedule that starts at freeroll level. My personal favorite is the $5 and $10 “On Demand” tournaments, which often offer added-value during off-peak periods.

Masses of Guaranteed Tournaments Every Day 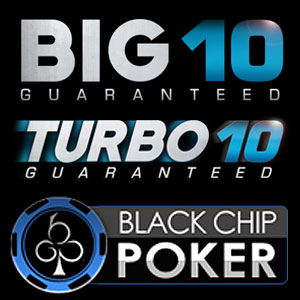 Unlike some other online poker sites, Black Chip Poker does not save up all its guaranteed tournaments until the weekend. The site hosts “Big 10” and “Turbo 10” series throughout the every day of the week – both series guaranteeing prize pools of up to $25,000 with buy-ins starting from just $1.10.

Plenty more guaranteed tournaments fill Black Chip Poker´s tournament schedule throughout the week, but one thing I have noticed is that sometimes the late registration periods are somewhat erratic. Beware, or you may be playing a tournament much later into the night than you anticipated!

Naturally at the weekend the prizes get bigger. The feature tournament at Black Chip Poker is the weekly $50,000 guaranteed event, but watch out for this guarantee increasing soon. Once a month the site doubles up the guarantee to $100,000 (and does not fall far short of reaching the guarantee).

Sit & Crush Your Way to Even More Valuable Prizes 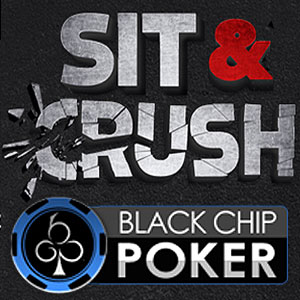 Black Chip Poker also extends it promotions to those who enjoy playing the shorter version of MTT tournaments – Sit & Go games. The site hosts a weekly “Sit & Crush” leaderboard competition in which points are awarded not on how well a player performs in a Sit & Go game, but how many they enter and their respective values.

“On Demand” games start when a pre-determined number of players have registered and then continue with a late registration period. This enables more players to enter the game, build the value of the prize money and extend the number of players who cash in the tournament.

They also allow players with limited bankrolls to earn extra points for the weekly leaderboard competition – which doesn´t pay out as deep as the Beast, but still pays enough to make participating in the promotion worthwhile, provided you like Sit & Go games.

If you like playing freeroll tournaments, you will love Black Chip Poker. Black Chip Poker hosts “On Demand” freerolls around the clock. These start when 270 players have registered and have a late registration period of thirty minutes.

Only ten players share in the $10 prize money provided by the site for each freeroll, but every player who cashes is also awarded points for an “On Demand Freeroll” leaderboard competition. The leaderboard competition rewards the top ten freerollers with a seat in a $55.00 buy-in tournament, and the winner also gets a ticket for the site´s feature $50,000 Sunday tournament.

You don´t have to make a deposit to compete in the “On Demand” freerolls but, if you do, be sure to use the following Black Chip bonus code: “CHIPPED”. With this code you take advantage of the site´s 100% match on first deposits up to $1,000 and to get a seat in up to four more “Depositor Freerolls” with a combined value of $1,000.