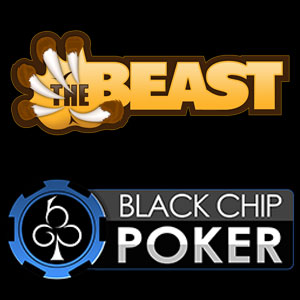 Black Chip Poker has announced that it is to run two Beast rake races and offer players 100% reload bonuses twice every month from 1st October.

The Beast rake race has been the most popular promotion on Black Chip Poker for more than a year and paid out more than $2 million in cash prizes and tournament tickets since it was first launched in August 2012. Now further changes are being made to the promotion to allow casual players a better opportunity to collect a valuable prize.

From October 1st, there will be two Beast competitions each month – the first running from the 1st to the 15th of each month, and the second taking place from the 16th until the last day of the month. According to Black Chip Poker´s spokesperson Robert Gray the change has been made to “level the playing field” and he explained the reason for changing the format of the promotion:-

The time consuming nature of a rake race usually allows only professional players with lesser commitments to take home the top spots. Casual players can now be competitive knowing they only have to put in the higher volume of hands for a shorter time span.

The dates on which winnings from the Beast rake race will be credited to players´ accounts have also naturally had to be changed. According to Robert Gray, players who cash in the first Beast race of the month will receive their winnings on or before the 20th of the same month and players who win cash prizes in the second Beast race will see the money in their Black Chip Poker accounts on the 5th of the next month.

To coincide with the change of structure, Black Chip Poker is also beginning a series of reload bonuses. These reload bonuses can be used on the two days prior to a new Beast rake race period until two days after it starts. Therefore, for the Beast promotion which runs from Tuesday 1st October until Tuesday 15th October, players who reload their accounts between this Sunday (29th September) and next Thursday (3rd October) will receive a 100% match bonus on deposits of up to $200.00 when they use the Black Chip Poker reload bonus code “EASY200” (normal conditions apply for clearing the bonus.

With the division of the Beast rake race into two monthly competitions, winners in the promotion who collect tournament entries to a Beast satellite will also have double the number of opportunities to use them. Tournaments offering packages to the Punta Cana Poker Classic and Latin Series of Poker will now be hosted twice monthly on the second and fourth Sundays of each month – still giving away a minimum of twelve superb packages into the target events.

September was another record-breaking month for the Beast on Black Chip Poker. Although the month is not yet over, the total prize pool has exceeded $200,000 – with more than $146,000 of the Beast fund allocated in cash prizes to the top 439 players and $54,000 being distributed in tournament tickets to 736 players. At the top of the leaderboard, “MamaCoolJ” looks like she (or he) is going to collect a prize of almost $15,000, with a min-cash in the promotion amounting to $74.82 (plus a ticket into October’s Punta Cana Poker Classic qualifier).