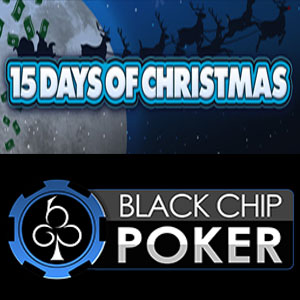 Black Chip Poker has announced a pre-Christmas bundle of presents for players on the site, which include fifteen $1,000 freeroll tournaments and a reload bonus.

Black Chip Poker is feeling very festive this year, and giving players the opportunity to win some Christmas spending money in their “15 Days of Christmas” promotion. Each day (from today until 25th December) Black Chip Poker will be hosting a freeroll tournament on their site with $1,000 guaranteed in prize money.

However, unlike “regular” freeroll tournaments, Black Chip Poker´s “15 Days of Christmas” freerolls will be played using their new “On Demand” format. “On Demand” tournaments only get underway when pre-determined number of players have registered for the event – similar to a Sit n Go, but with late registration available once the game has got underway.

Consequently, registration for the “15 Days of Christmas” freeroll tournament will begin each day and 6.15pm (ET) each evening, but the first hands will not be dealt until 1,000 players have registered. Late registration will be available for an hour, but with the steep blinds structure and only 1,500 chips to start with, players leaving it until the last minute to enter will find themselves with just enough chips for six Big Blinds.

It is not like a poker site to give away $15,000 without players having to grind away at the tables to qualify for a piece of the action, but this time there is no catch involved. The $15,000 that is being allocated towards the Christmas freerolls is the “small change” left over from the Bad Beat Jackpot promotion that ceased to exist in September this year.

The Jackpot was only partially won at the end of the promotion and, rather than hang onto the difference, Black Chip Poker made the decision to share the bonus around as many players as possible. The only “catch” if there is one, is that the money is being used to heighten the awareness of “ON Demand” tournaments.

Indeed, there is a very good reason for players to become more familiar with the format, as double and quadruple points are awarded in Black Chip Poker´s monthly “Sit n Crush” competition to players who compete in “On Demand” Sit n Go´s – another promotion in which there is no requirement for players to grind away for hours before collecting a valuable prize.

The launch of the “15 Days of Christmas” corresponds nicely with Black Chip Poker´s mid-month reload bonus. Although reload bonuses are a feature regularly enjoyed by players at the site, this month players who deposit between Friday 13th December (tomorrow) and Tuesday 17th December will receive a 100% match bonus on deposits of up to $200.00 when they use the reload bonus code “Christmas”.

New players on the site will qualify for a 100% match bonus on deposits of up to $1,000 when they use the Black Chip Poker bonus code “CHIPPED” and, with so many promotions going on at Black Chip Poker, where else would it be better to spend the Christmas holidays?