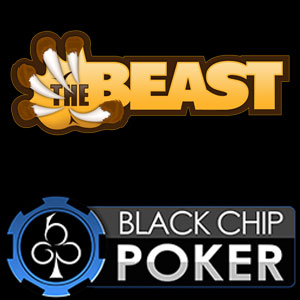 Black Chip Poker has announced that from 5th April the Beast progressive rake race will be extended to all cash games tables and the “premium rake” removed.

The Beast progressive rake race was first introduced in July 2012 and has been one of the most popular features on Black Chip Poker ever since – awarding thousands of dollars each week in cash prizes and tournament entries to hundreds of players.

Now, Black Chip Poker has announced a series of changes to the promotion which will not only remove the players´ contribution towards the Beast jackpot but which will also make it easier for small stakes players to win a slice of the prize money.

Under the current system, $0.25 is deducted from the pot when four or more players are dealt into a hand on a Jackpot table and used to feed the Beast – $0.18 to the cash race and $0.07 towards the award of tournament tickets.

This was casually referred to as “premium rake” because it was a deduction from the pot (the same as “standard” rake) which affected the profitability of a player over a session. From 5th April, the $0.25 deduction will be no more, and instead, the Beast will be fed by Black Chip Poker from the “standard” rake deducted from the pot.

How the Beast Will Work

With effect from 5th April, every time a raked hand is played at Black Chip Poker, $0.02 in every $0.06 deducted from the rake will go towards the Beast prizes – even when just two players are seated at a table! Players will receive one point towards their leaderboard position for every $0.02 they personally contribute towards the rake based on their weighted contribution.

Here is Black Chip Poker´s explanation of how the Beast will work:

One further significant change to Black Chip Poker´s “Beast” is that micro-stake players will be welcome to participate in the promotion from 5th April. Formerly, the Beast jackpot tables were only available at stake limits of $0.10/$0.25 and above, but with the promotion now being extended to include all cash game tables, rake deducted from micro-stakes will also be counted towards the Beast jackpot.

Micro-stakes players are going to have to put in some serious hours to make an impact at the top of the leaderboard, but many could now qualify for the tournament tickets which are handed out as prizes – enabling them to qualify for valuable live events sponsored by Black Chip Poker.

Will the Beast Evolve Further?

Players on Black Chip Poker have been used to many evolutions of the Beast promotion since it was first introduced as a monthly promotion in July 2012. In October last year it was changed to a bi-weekly promotion, and then to a weekly rake race competition at the end of January 2014.

What future plans Black Chip Poker has for the Beast remain under wraps for the present, and will probably depend on the success of this current metamorphism; however one thing is for sure – it is that time of the month for Black Chip Poker´s bi-monthly reload bonus offer.

That´s right – from Thursday March 13th through to Monday March 17th, Black Chip poker is offering existing players the opportunity to reload their accounts and receive a 100% match bonus up to $200.00.

The Black Chip Poker bonus code to use for March´s mid-month reload bonus is “MADNESS”, but if you are yet to open an account and play at the Beast jackpot tables, you will qualify for a 100% match on first deposits up to $1,000 when you use the following bonus code: “CHIPPED”.

See you at the (free) Beast tables!