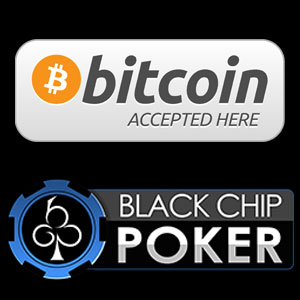 Black Chip Poker has endeared itself to Bitcoin poker players by offering the facility of opening and maintaining real money accounts with the crypto-currency.

For those who have now paid much attention to developments in the world of virtual currencies, Bitcoin is a versatile “crypto-currency” which is used around the world as an anonymous method of payment option – although each transaction is secured and verified by the Bitcoin “protocol” before the currency changes hands.

Operating a Bitcoin account is no more difficult than operating a PayPal or a Neteller account, with the added advantage that any transactions are free of charge and that Bitcoin can be converted immediately into dollars – or any other currency – through one of the many Bitcoin exchange websites like Coinbase (where most people buy them from in the first place).

Is There a Future for Bitcoin Poker?

In a recent interview we had with Phil Duncan of Bitcoin Poker he stated that playing poker is still in its early stages, the current rooms are jumping on the BTC train to make some quick money. continuing with It’s not a matter of IF the established poker rooms will start accepting Bitcoin as a payment method, it’s a matter of WHEN.

Now Black Chip Poker – one of the leading skins on the popular Winning Poker Network – has announced that it is going to allow players to open accounts, or deposit into existing accounts, using Bitcoin – extending the options available for those who like to play online poker anonymously.

The big advantage for Bitcoin fans of playing on Black Chip Poker is that the site will convert Bitcoin deposits into dollars at the current rate, and then allow players to withdraw their funds in dollars to avoid any possibility that a winning player loses money due to currency fluctuations.

With Black Chip Poker providing a better software product than the “Bitcoin exclusive” online poker sites – and a better range of promotions – it is likely that the decision to accept Bitcoin deposits on Black Chip Poker will prove very popular and attract a new breed of player to the site.

By offering the option to deposit by Bitcoin, it is likely that the liquidity on Black Chip Poker will improve substantially. There are many poker players who already use Bitcoin as a virtual currency, and the doors opening at Black Chip Poker should encourage them to get involved with the site.

Bitcoin poker players have developed a reputation of being a little looser than “regular” poker players, mostly due to the pioneer Bitcoin-exclusive poker sites being originally occupied by “currency libertarians”, so existing players may see a little more money on the Black Chip Poker tables.

Furthermore, as the dollar value of the Bitcoin has increased significantly over the past few months, players who purchased Bitcoin at low rates are effectively playing with “free” poker money once their Bitcoin has been converted into dollars, and again will tend to be a little looser than “regular” players.

It is due to customer-friendly options such as accepting deposits by Bitcoin that Black Chip Poker has become one of the most popular online poker sites that accept players from the US. Existing Black Chip Poker players will be aware of the site´s innovative “Beast” progressive rake race and other valuable promotions – now Bitcoin poker players can take advantage of them as well!