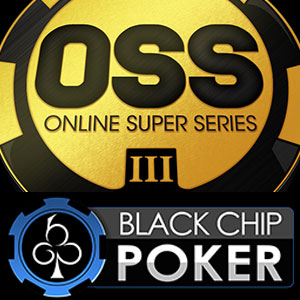 Black Chip Poker has announced the schedule for the Online Super Series III, which this year has 63 events and guaranteed prize pools in excess of $500,000.

The 2014 running of Black Chip Poker´s Online Super Series (OSS III) is scheduled to take place over ten days between March 28th and April 6th, and will consist of sixty-three events with combined guarantee prize pools in excess of $500,000.

The full schedule for the Black Chip Poker OSS III contains a variety of disciplines and formats including bounty tournaments, 4-Max events and a “Hyper Mega-Stack” tournament in which players have to preserve their 25,000 chip starting stack through blinds which increase every three minutes.

Qualify for the OSS III Main Event for Free

Black Chip Poker is giving players the opportunity to win their seat in the OSS III Main Event for free through a daily freeroll tournament (at 1:00pm ET) in which the five top players qualify for the nightly $6.60 re-buy and add-on tournament (at 7:30pm ET) which guarantees three seats into the $200,000 guaranteed feature.

There is also a freeroll route available for players who wish to attempt to win an OSS III Passport which entitles them to a seat in all eight of the primary OSS III tournaments (worth $2,188). The daily Passport Freeroll takes place at 3:05pm (ET), with the five top players being awarded a seat in the next $55.00 buy-in Passport Final – currently due to be played on Sunday 9th March at 6:15pm (ET).

Plenty of Other Satellites Already Running

Plenty of other satellite qualifiers are already running for the primary OSS III events, and this year Black Chip Poker has already confirmed that players who qualify more than once for the same event will have “Tournament Bucks” credited to their poker bankrolls – which can then be used for re-entry into events that allow players to fire second bullets, or to enter other OSS events with comparable buy-ins.

There is a comprehensive schedule of satellite qualifiers offering guaranteed seats to target events in the Online Super Series III and, with there still being almost four weeks until the series gets underway, many of the satellite qualifiers are under-subscribed and represent terrific value for those who qualify early.

Existing Black Chip Poker players are also being offered the opportunity to reload their accounts and get a 100% match bonus on deposits of up to $200.00. This current reload bonus offer runs from Thursday 27th February until Monday 3rd of March, and players wishing to take advantage of Black Chip Poker´s generosity should make their deposits using the Black Chip Poker bonus code “BONUS200”.

Players who are not already clients of Black Chip Poker can take advantage of an even more generous first deposit bonus of 100% on deposits of up to $1,000. Simply create your account, entering bonus code “CHIPPED” on the first registration page, and you will be eligible for the massive welcome bonus, plus an entry into the $250.00 New Depositor Freeroll.