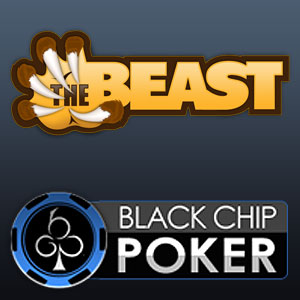 Black Chip Poker has announced that it is to add $60,000 to the Beast prize pool over the next six weeks in a new promotion called “The Beast Unleashed”.

Black Chip Poker´s “Beast” – or as it is being called during the forthcoming promotion period “The Beast Unleashed” – is a weekly rake race which rewards the players who put in the highest cash game volume each week with cash prizes and satellite tournament tickets into Black Chip Poker´s sponsored live poker events.

Currently the Beast pays out about $20,000 in cash each week to the top 60-80 players who play on Black Chip Poker´s cash tables, with a further 30-40 players picking up satellite tournament tickets. However, from week commencing Saturday 19th July, players will have the opportunity to increase their rewards by big bonus amounts.

The Beast Unleashed and How to Win

From next Saturday (19th July), each of the following six week´s prize pools will be enhanced by $10,000, with the extra cash being distributed as follows:

To qualify for the extra prize money, players at Black Chip Poker do not have to enter any competitions, opt-in, register, or do anything different at all – just keep continuing to play on the Black Chip Poker cash tables and earn points towards each week´s leaderboard competition.

Prizes are awarded automatically with no conditions attached or play-through requirements. The Beast Unleashed promotion continues through to Friday 29th August, and there is no limit on how many cash bonuses a player can collect (up to six, obviously).

Sit n Crush Unloaded Prizes to be Enhanced as Well

In parallel with the “Beast Unleashed” promotion, Black Chip Poker is also adding $5,000 each week to its popular Sit n Crush leaderboard competition, in which players get rewarded for competing in Sit n Go tournaments – especially Black Chip Poker´s “On Demand” games, which start when a pre-determined number of players have registered and then continues like a multitable tournament with late registration available and the prizes determined by the number of players entered when late registration closes.

Points are awarded towards the Sit n Crush leaderboard depending on the number, type and value on a Sit n Go game irrespective of where a player finishes, and the players with the most points at the end of each week share in the Sit n Crush prize pool. Currently, the promotion pays out around $2,500 each week, but from next Saturday (19th July), players finishing between 1st and 35th place will receive cash bonuses each week in addition to the “regular” prize.

What Else is Going On at Black Chip Poker?

Also on Sunday, the mid-month Black Chip Poker reload bonus starts, and existing players at the site can get a 100% bonus on their first deposits up to $100.00 until Wednesday 17th July. New players who wish to compete in the $100K tournament, or participate in the “Beast Unleashed” or “Sit n Crush Reloaded” promotions, are eligible for a 100% Black Chip Poker bonus on first deposits up to $1,000; and – for this special offer plus entry into four $250.00 Depositor´s Freerolls – players should use our BlackChip Poker bonus code “CHIPPED”.