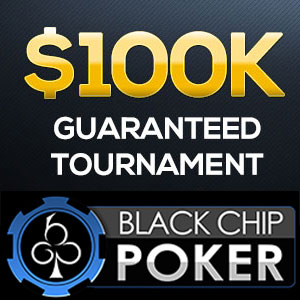 Black Chip Poker has announced that it is doubling the guarantee on this weekend´s feature tournament from $50,000 to $100,000 while keeping the same buy-in.

Buoyed by the success of its recently concluded Online Super Series, BlackChip Poker is increasing the guarantee on this Sunday´s $215.00 buy-in feature tournament to $100,000. As usual the tournament will get underway at 7.00pm (ET) and will have three hours of late registration, and unlimited re-entries for players unfortunate enough to lose their 10,000 chip starting stack within the first twelve levels.

Black Chip Poker has also scheduled a series of satellite events which will enable players to qualify for the feature tournament for as little as $1.00. The first stage of the series is played at 35 minutes past the hour and guarantees one seat into the nightly two seat guaranteed satellite at 6.00pm – which can also be bought into directly for $24.00. A Sit n Go route to the target tournament is also available, with 12-player “On Demand” tournaments available in the SNG lobby with a buy-in of just $13.20.

Will There be Any Overlay on Sunday?

Players not familiar with Black Chip Poker´s Sunday feature tournament should note that, prior to the Online Super Series III, the site had been smashing its $50,000 each week as the popularity of Black Chip Poker and other sites on the Winning Poker Network continues to grow. Quite possibly there will be an overlay on Sunday when the guarantee is raised to $100,000, but this is not assured.

We believe that there will come a time in the near future when the guarantee for Black Chip Poker´s Sunday feature tournament is permanently $100,000, and feel this Sunday´s event has been scheduled with the enhanced guarantee to gauge customer reaction – especially after last weekend´s OSS III Main Event failed by just one buy-in to make its $200,000 guarantee.

An incredible 999 players competed in last weekend´s climax to the Online Super Series III, with the winner – “Common Joe Jug” – adding $38,200 to his (or her) Black Chip Poker bankroll. In total 153 players cashed in the Main Event, including the player “sandymar”, who went on to take down the OSS III Leaderboard competition and win a package to the Punta Cana Poker Classic in November.

Sandymar enjoyed an incredible final week of the Online Super Series III – winning event #46 and adding a further two final table appearances to his runner-up spot in the first week of competition. We counted eighteen cashes in his points total, enabling him to run away with the competition.

Win a Package to the LSOP Millions II This Weekend

Black Chip Poker´s $100,000 guaranteed tournament this weekend is sandwiched between two qualifiers for the LSOP Millions II which will be held at the Hard Rock Megapolis Hotel in Panama in September and which guarantees a $1million Main Event. The two qualifiers get underway at 6.00pm (ET – five packages guaranteed) and 8.30pm (ET – two packages guaranteed) with a buy-in of just $55.00 and those that qualify for the event can expect to receive:

Only last month, Carter Gill took down the first LSOP Millions for $175,050, and second time around it could be you – courtesy of Black Chip Poker!