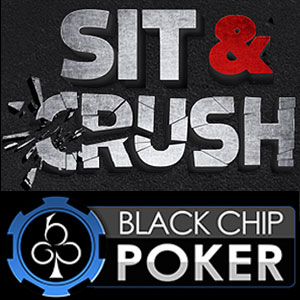 Black Chip Poker has announced that it is going to add an extra $2,500 in the Sit n Crush Jackpot pool for the next four weeks – making 10,000 reasons to play!

Sit n Crush is Black Chip Poker´s weekly Sit n Go promotion, in which players earn points for entering Sit n Go games, which then gives them a position on a leaderboard. At the end of each week Black Chip Poker pays out cash prizes and tournament entries to the 50-60 players at the top of the leaderboard; but whereas the winner usually picks up around $250.00, for the next four weeks they will get an extra bonus.

Black Chip Poker are adding $2,500 to the Sit n Crush prize pool each week for the next four weeks to the top five players in each week´s competition. A top bonus prize of $1,000 will go to the four winners, while players in positions 2-5 will receive bonuses of $200.00 and $600.00. It all makes for a pretty exciting March on the Sit n Go tables at Black Chip Poker!

Unlike many Sit n Go leaderboard promotions, Black Chip Poker´s Sit n Crush awards points based on the contribution each player makes to the prize pool when they pay a fee to enter a Sit n Go game. For example, when a player enters a $15.00 + $0.80 Sit n Go, $0.60 of the fee goes to Black Chip Poker for hosting the game, and the other $0.20 is added to the Sit n Crush prize pool.

Players are awarded 5 Points towards their position on the leaderboard for each $1.00 they contribute to the pool; so, in the example above, the player would receive 1 Point. Each Friday at 23:59 (ET) the competition closes, and the players with the highest number of points share the prize pool consisting of cash awards and tournament tickets.

“On Demand” Sit n Go games are one of Black Chip Poker´s recent innovations and, in an attempt to drive more players to the games, the site is awarding multiple points towards the Sit n Crush leaderboard when players take part in On Demand games.

The games start like “regular” Sit n Go tournaments – i.e. when a pre-set number of players have entered – but allow late registration for the first six levels in order to allow more players to enter the game, build a larger prize pool and increase the depth of the payout structure.

Black Chip Poker is also offering existing players the opportunity to reload their accounts and get a 100% match bonus on deposits up to $200.00 – but you will have to be quick if you want to take advantage of this offer as it ends on Monday 3rd March!

To qualify for the bonus, simply make any deposit of $50.00 or more and enter the Black Chip Bonus Code “BONUS200”. Normal terms and conditions apply for clearing the bonus, and players have 30 days in which to make the most of Black Chip Poker´s generosity.

New players have an even better offer available to them. Black Chip Poker offers new players a first deposit 100% match bonus of up to $1,000 on their initial deposits. You can find the latest valid code at our dedicated Black Chip Poker bonus code page, New players get a little longer to earn the player points required to clear the bonus – 60 days.

The leaderboard week may have already started, but it is not too late to get involved. Those “in the money” this week will probably collect no more than 60-70 based on the results of previous weeks. Players gunning for the top positions, and the Black Chip Poker Sit n Crush added money, will probably have to clock up more than 700 points.

That´s a lot of sitting and going!