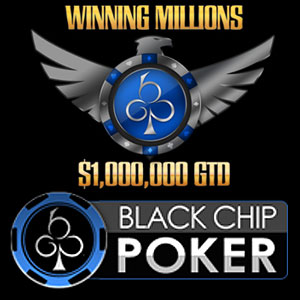 Black Chip Poker has released details of an online poker tournament the site will be hosting later this year that will have a $1 million guaranteed prize pool.

Online poker tournaments with million dollar prize pools are a distant memory for most US poker players, but now Black Chip Poker is offering the chance for players with all level of bankroll to compete in a $1 million guaranteed tournament on Sunday December 14th.

The early announcement of the Winning Millions event is in order to allow players to qualify for the $540.00 buy-in tournament via an aggressive series of satellite qualifiers which begin this coming Wednesday (July 16th) and includes a Steps qualifying route which starts at freeroll level.

Under the tag-line Stack Your Chips High and Stand Proud America – Poker in the USA is Back with a Vengeance, Black Chip Poker aims to stir the emotions of online poker players who have not logged into an online poker account since pre-Black Friday (the last time an online poker tournament of this magnitude was held).

In the press release accompanying the announcement, a spokesperson for Black Chip Poker said We’re excited to raise the bar and set a new standard for poker in America with a $1 million tournament prize pool that’s reminiscent of the glory days.

The tournament itself will be a NL Hold´em Freezeout event which starts at 3:00pm EST (8:00pm GMT) in which players will start with a stack of 10,000 chips with 15-minute levels and a gentle blind structure starting at 15/30. Late registration will be allowed for five hours, by which time the Level 20 will be coming to a close with blinds of 500/1,000 and a 100 chip ante.

The first prize in the tournament is guaranteed at $200,000, and the nine players who survive to the final table will be offered a free bank wire to transfer their winnings out of their accounts just in time for Christmas.

Black Chip Poker has acknowledged that the $540.00 buy-in is going to be too steep for the majority of bankrolls and has constructed a comprehensive series of satellite qualifiers so that players of all bankroll levels have the opportunity to compete in this historic event.

Each evening from Wednesday 16th July at 8:30pm EST the site will be hosting a $109.00 buy-in Re-buy and Add-on satellite which will guarantee two seats to the target event. Players can qualify for this satellite through a range multitable sub-satellites which start at freeroll level or via Sit n Gos with buy-ins of $29.40 (full ring – 2 seats guaranteed) and $25.20 (6-Max – 1 seat guaranteed).

The Winning Millions $1 million guaranteed tournament is the latest promotion from Black Chip Poker is a summer of promotions from the site. Just last week the site announced it was Beefing up the Beast – Black Chip Poker´s weekly rake race – with $60,000 being added to the prize pools throughout the summer, and Black Chip poker is also adding $5,000 each week to the site´s Sit n Crush leaderboard competition.

No doubt the Winning Millions tournament will bring hundreds of new players to Black Chip Poker and, if you have not yet registered an account with the site, Black Chip Poker offers a 100% match poker bonus on first deposits up to $1,000 with some of the easiest clearing requirements of any US facing poker site.